Here are some more post-internment photos of Japanese-Americans.

After school the Shimomura children usually play with Mollie and Bonnie Ritchie,
sometimes with the new kittens and Irish settler puppies on the Ritchie farm,
and often with their dolls in the living room of the Shimomura home. 1944
Among the animals on the A. L. Ritchie and J. S. Ritchie farm are nine Irish settler pups
which are being fed by Mrs. Ritchie, Mollie Ritchie, and Mrs. Umeko Shimomura. 1944
Chieko Anne Shimomura is known as Annie in the third grade of the Westfield Friends
School at Riverton, N.J. because there are two other Annes in her class. 1944
David Shinn Shimomura does his homework in the family kitchen
while his mother, Mrs. Umeko Shimomura looks on. 1944 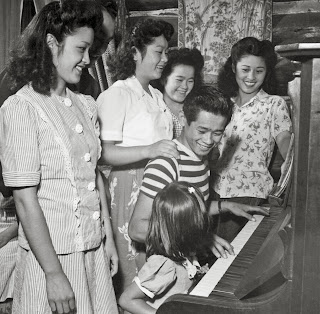 Gathered around the piano for some singing are several members
of the Yamasaki family with a couple of their friends. 1944
In the yard of their home on the Ritchie fruit farm, Riverton, N.J.,
Mrs. Umeko Shimomura has started a small vegetable garden. 1944
Mr. and Mrs. Frank Matsuichi look over the day's menu with Mrs. Harry Champion,
manager of the Old Lyme Inn, Old Lyme, Connecticut. The Matsuichis recently
arrived from Heart Mountain, to live and work at the Inn. 1945
Mrs. Asaka hands out soda pop to neighborhood children in the grocery store
which she and her husband own. Harry Asaka, Issei, first relocated to
Washington, D.C., in August, 1943, from Gila River Relocation Center. 1945
Mrs. George Kiyoi is holding her 2 1/2 week old son, Michael for his first picture.
The family now lives in New Jersey where he is working at the Seabrook Farms. 1944
Mrs. Miye Tachihara Ota and her sister, Mrs. Hama Itow
add finishing touches to a customer's wave. 1945
Mrs. Teruharu Suzuki looks on as Mrs. Jose Machado points out a bumblebee
to a neighbor. Mr. and Mrs. Suzuki left Minidoka in May and have been working
for the Machados at their country home in Cornwall, Connecticut. 1945
Pat Urushima from Jerome is now working for the
Public Health Service at Bethesda, Maryland. 1944
Tami Nakaguchi arrived in Washington from Jerome in Sept., 1943.
Using secretarial training acquired at the center, Tami is now working
for the Public Health Service at Bethesda, Maryland. 1944
The Abe family from Colorado River, formerly of Seal Beach, California,
gather on the porch of their new home to have their picture taken. 1945
The kindergarten class of the Westfield Friends School at Riverton, N.J. adds a final whistle
to a whistling story being told them by their teacher, Mrs. Cora Williams. 1944
William Mori (left), owner of the K. and J. Three Decker Restaurant, walks along a busy street in Waterbury, Connecticut, with one of the resettlers who works in his restaurant. 1945
Posted by rfdarsie at 9:03 AM No comments:

Matthew Brady was one of the primary photographers active during the American Civil War. 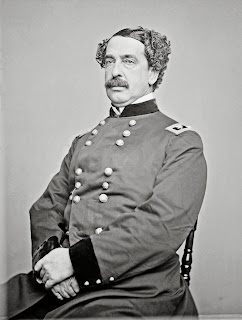 Abner Doubleday
[a successful Civil War general, Doubleday has been
mistakenly credited with having invented baseball] 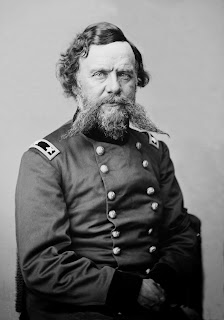 Alpheus S. Williams
[another Union general in the Civil War] 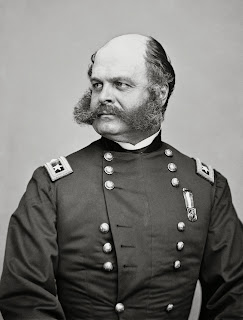 Ambrose Burnside
[a Union general with mixed success; his distinctive facial hair gave birth to the term "sideburns"]
Portrait of Secretary of the Treasury Salmon P. Chase, 1860–65
Posted by rfdarsie at 11:38 AM No comments: 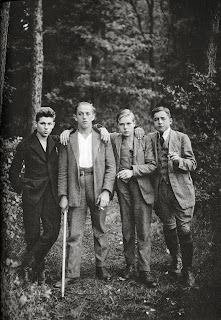 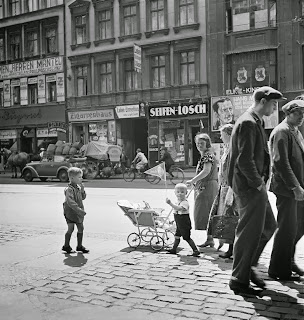 Street scene with swastika flag in background
Untitled [Beach dwellers in the afternoon, Nice, France] c. 1939
Women walking with a baby carriage, Berlin, 1935-36
Zionist youth dancing the Cherkessia, a genre of dance from the Caucasus Mountains
adopted by Jewish pioneers and brought to Palestine, 1939
Posted by rfdarsie at 8:22 AM No comments: