Lewis Wickes Hine was a photographer active in the first three decades of the 20th century. He was perhaps the first to effectively use photography as a driver for social change. His searing photos of child labor practices helped bring about legislation to end child labor in the US.

Hine's output was enormous. Much of it is available in raw form at the Library of Congress collection (from which most of Hine's photos posted on this blog will be drawn).

Many web resources focusing on Hine exist. Two good ones are the Lewis Hine Project and a New York Times feature.

In this set are photos of children shucking oysters - a demanding and dangerous job.

All are oyster-shuckers in Barataria Canning Company, Biloxi, Mississippi, 1911

All these children (except babies) shuck oysters and tend babies at the Pass Packing Co. I saw them all at work there long before daybreak. Pass Christian, Mississippi, 1911

Carrie, a 7-year-old oyster shucker at Pass Packing Co., going home at 5 pm after a day beginning at 4 am, and spent shucking oysters and tending the baby. Pass Christian, Mississippi, 1911

Four-year-old Mary, who shucks two pots of oysters a day at Dunbar.
Tends the baby when not working, Dunbar, Louisiana, 1911 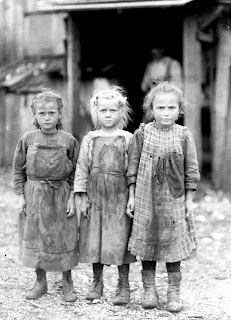 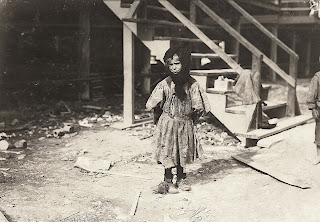 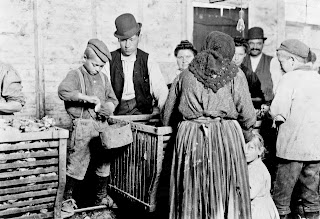 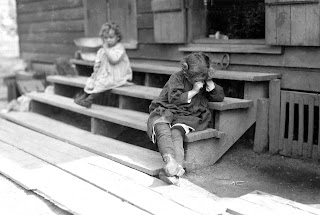 Olga Schubert, a little 5-year-old after a day's work that began about 5 am
helping her mother in the Biloxi Canning Factory, 1911 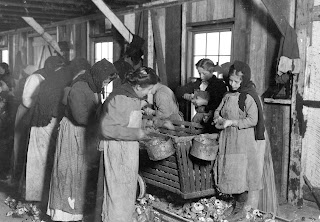 On right-hand end is Marie, eight years old, who shucks 6 or 7 pots of oysters a day.
Bayou La Batre, Alabama, 1911 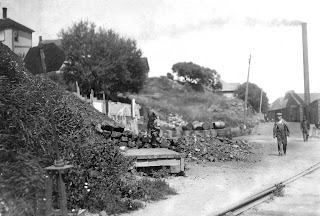 In center of the picture is Phoebe Thomas, 8 year old Syrian girl, running home from the factory all alone, her hand and arm bathed with blood, crying at the top of her voice. She had cut the end of her thumb nearly off, cutting sardines in the factory, and was sent home alone, her mother being busy. The loss of blood was considerable, and might have been serious. Eastport, Maine, 1911
This is only the first of a series of photos of this girl.
(OK, so this is sardines, not oysters.) 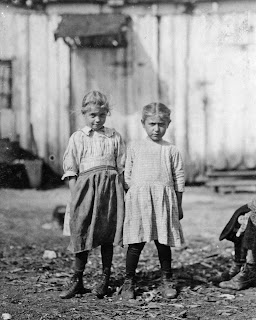